Prophylaxis and treatment of periodontal diseases 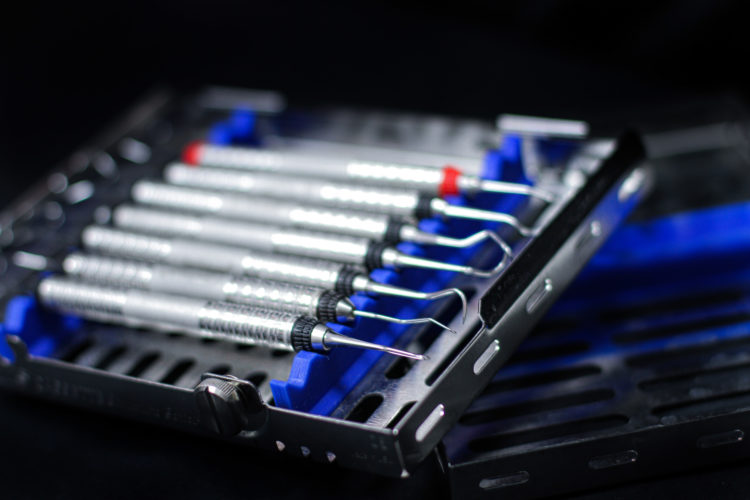 The benefits of treatment at the iStomatolog center

Prophylaxis and treatment of periodontal problems

«Periodontium» is a generic term for an entire complex of dental structures (gums, periodontal fiber, bone tissue of alveoli, and cement of dental root) which have a common source of innervation and blood supply. They form an organic unity, all parts of which are interrelated by the commonality of functions and nature.

Dental plaque and tartar play an important role in the occurrence of inflammatory disorders of periodontium (gingivitis, periodontitis). The role of Str.sanguis, Bac.melonogenicus, and Actinomyces viscosus, the microorganisms which are found in the dental plaque, is considered to be the greatest.

Normally, the mouth cavity contains many microorganisms which have no pathogenic (disease-causing) effect. Besides, there are plenty of natural defense mechanisms.

Saliva plays the main role because it effectively prevents an excessive accumulation of microorganisms in interdental spaces and in dentogingival junctions.

Anti-microbial components of saliva (lysozyme, B-lysine etc.) inhibit the development of microorganisms and prevent their harmful effect on periodontium. A powerful capillary network is located near the most vulnerable areas (gingival crevices). When microorganisms release an increased amount of toxins, ferments and other harmful substances, the body actively directs protective blood cells (white blood cells) into these areas and their components deactivate or destroy the microbial cells. That way, the processes of microbial invasion and anti-microbial protection remain fairly balanced.

As with any other inflammation, which was caused by an infectious agent, the inflammation of periodontal tissues (periodontitis, gingivitis) can be caused not only by the presence of microorganisms but also by the overall condition of the body. The acuteness of the process, its clinical and morphological characteristics, as well as the outcome of inflammation, is determined by the reactivity of the organism.

The most common periodontium-related problems

Gingivitis — the gum inflammation caused by the adverse effect of local and general factors. It develops without violating the integrity of the dentogingival junction (the area where tooth connects with periodontium).

Periodontitis — the inflammation of periodontal tissues which is characterized by the progressive degradation (destruction) of periodontium and bone.

Patients often complain about the feeling of discomfort in the gums and itching. The other signs are bad breath, distorted taste, bleeding of the gums during eating or toothbrushing. The overall condition can change only slightly, but the exacerbation periods can be accompanied by malaise or a subfebrile fever of 37,5 degrees.

The checkup will reveal the swelling, hyperemia (reddening), cyanosis of gums and their thickening, restricted areas of desquamation, sporadic erosions, mainly at the edges of interdental papilla; mechanical irritation of gums accompanied by the bleeding; the teeth are covered with a large amount of dental plaque and tartar.

It is a chronic process of gum inflammation which is accompanied by the proliferate developments (overgrowth of tissues). It can be observed in cases of the malalignment and crowding of teeth, dental trauma caused by the overhang of filling or crowns, endocrine disorders during pregnancy or puberty, administration of diphenyl-based drugs, deficiency of vitamin C, blood disorders etc. The nature of complaints is determined by the severity of disease.

There are two types of this disease: granulating (swollen) form (complaints about the overgrowth of gums, itchiness, bleeding, pain while eating, bad breath) and fibrous (characterized by the absence of complaints or the unusual appearance and shape of gums).

Characterized by the occurrence of necrosis and ulcers due to the decrease of body reactivity and as the hyperergic reaction to tissue sensibilization caused by fusospirochetal symbiosis. The ulcerative gingivitis is a sign of a serious impairment of body reactivity as the result of general illness or vulnerability of gum tissue. Patients often complain about malaise, headache, loss of appetite, work decrement, putrescent breath odor, painful gums, bleeding gums, complicated food ingestion, occasional pain during swallowing, masticatory spasm etc.

Characterized by the degradation of all tissues of periodontium: gums, periodontal tissue, alveolar bone, and tooth.

Chronic generalized periodontitis is the most common case in the clinical practice. It can develop over the long period of time, sometimes decades. The inflammatory process in the tissues of periodontium (periodontitis aggravation) can exacerbate in the case of decreased body reactivity, associated common diseases, accompanied by the secondary infection. Incorrectly or poorly manufactured dentures or their elements (bridgework, crowns, bugel dentures, removable dentures), partial absence of teeth, which leads to a disturbance of metabolism of calcium, phosphorus, amino acid composition of bones tissue and development of inflammatory and dystrophic processes in periodontium are among the major causes of localized periodontitis. Also worth noting that hormonal and metabolic disorder may attribute to the occurrence of periodontitis.

The amount of complaints from patients depends on the severity of their overall condition: malaise, bad breath, gum bleeding from mechanical stimulation, wobbliness of teeth or changes in their disposition (inclination or protrusion), increased teeth sensitivity etc.

It is necessary to understand that periodontitis develops exponentially; this disease will not heal by itself, the wobbliness of teeth will increase (up to their loss) and the inflammation will only get worse.

The early diagnosis will ensure the early start of an appropriate treatment and more favorable prognosis for the future!

Stages of treatment of periodontium

In three month time after the combination therapy, it will be necessary to undergo another checkup and diagnostics. The necessity and the frequency of repeat supporting procedures will be determined individually.

The X-ray examination methods play an important role in the process of diagnosis determination and differential diagnostics of periodontitis, periodontosis, and gingivitis.

However, we want to draw special attention to such cause as smoking. Everyone knows that smoking is bad. As for the dental health, the harmful effect of tobacco smoke occurs in the following ways:

Clinical observations confirm the role of tobacco smoking as a major risk factor for development and progression of marginal periodontitis.

During the treatment of smokers who suffer from periodontitis, the speed of recovery of their gingival attachment can be 25-60% lower compared to the non-smokers, even if the same treatment methods were used.

When carrying out the treatment of periodontitis (the gum treatment) and regenerative measures (which accelerate healing and recovery) of smokers, the doctor should take into account the negative prognosis regarding the postoperative process of wound repair. The effects of full smoking cessation will manifest immediately:

Therefore, the patient’s motivation to limit or even stop smoking during the treatment of periodontium diseases (periodontitis, periodontosis, gingivitis) is very important.

What is the cost of treatment of periodontitis, periodontosis, and gingivitis?

Only a multidimensional approach can ensure the effectiveness of treatment of periodontal diseases. The cost of treatment largely depends on the severity of a periodontal problem, as well as the general condition of teeth (the necessity of additional treatment). Planning, evaluation of the effectiveness of certain therapies, stages, and progression of treatment can be determined only after a thorough checkup, diagnostics, the X-ray and computer examination. All these procedures can be carried out in the course of a consultation at the iStomatolog center.

Payment for all services is made in the national currency of Ukraine - Hryvna.

X
We take care of your safety at iStomatolog
Safety measures